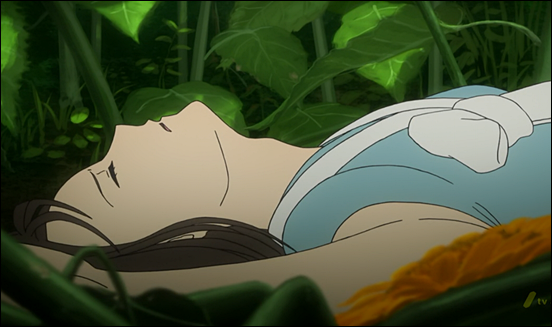 Strangely enough, this episode also managed to be quite unnerving. However, it couldn’t have been more different visually if it tried! Whilst last week our characters stumbled blindly around a cramped, pitch-black hospital, this week they flee from the fiend into the surrounding countryside, in (for the most part) broad daylight. But the reason it was still tense was because this made you feel as though Saki and Satoru were completely exposed to the threat, and with no weapons to fight back against it, they had absolutely no chance of winning against it were it to find them. Saki even said as much herself! And after years of being indoctrinated with the values of never giving up, and always fighting against adversity by your typical shounen show, having your main character acknowledge that they’re doomed is pretty harrowing!!

How many of you have seen the Disney film Bambi? There’s this scene where the cute woodland critters are hiding from this frightening, faceless hunter in the tall grass of the meadow. This scene was incredibly tense, partly because of the suspenseful score, and partly because, as you never got to see the hunter, your imagination mad him out to be some kind of heart-stopping-ly horrifying monster. This scene was basically recreated during the first few minutes of this episode when Saki and Satoru hid from their very own hunter in the grass themselves. Needless to say, all the tension I felt when watching that scene from Bambi as a child came rushing back! It’s highly unlikely the similarity between the two scenes was intentional, nevertheless, it’s still awesome that it enabled me to relive that old, long-forgotten feeling of fear!!

Something else that I found unnerving during this episode was the lush, richness of the countryside our characters found themselves running through. Why? I suppose you find yourself thinking! The peaceful sound of rushing water as Saki and Satoru made their getaway down the canal… The brilliant blue of the sky… The stunning field of sunflowers… It all seemed very out of place with what was actually happening- our two main characters were being hunted down like vermin!! It almost seemed ironic, or mocking in tone, like, it doesn’t matter what happens to the two remaining main characters, the world will continue on as though nothing even happened… It made me think of the futility of human life, which is one of the most unnerving things you can think about, if you think about it…

But before I become to melancholic thinking about whether or not there’s a point to it all… I’m beginning to notice a connection between Saki’s dreams, or visions, or whatever you want to call ‘em. They all seem to have occurred when she’s under a huge amount of stress. I’m not sure why she’s most susceptible to them then… Maybe, as with so many others, suffering from prolonged stress makes her vulnerable? Or maybe that’s when the individual responsible for her visions most wants to tell her something, or protect her? All the visions so far (during episodes 11, 16 and 20) seem to have warned, or encouraged her about something. This further convinces me that Shun is the cause of these visions, as the person responsible must care for her very much to always be on standby to help. Does anyone else have any theories on Saki’s visions?