Posted by Ty-chama on August 14, 2018
Posted in: Anime Series, Character Spotlight, Naruto. Tagged: Naruto is and has always been amazing, Sasuke's not so bad after all, Ty does a 180. 16 Comments

Sasuke might seem like a bizarre choice for this month’s Character Spotlight. After all, I’ve been very vocal in my dislike of him, even going so far as to call him a piece of human excrement during a recent blog post. So why have I decided to write about Sasuke, of all people, this month? Well, after almost 10 years of watching Naruto Shippuden, I’m finally just eight episodes away from finishing it – cue the party poppers! This means that I recently watched Naruto and Sasuke’s final fight in the Final Valley. This fight gave me a lot of insight into Sasuke’s character, so much so that, for the first time ever, I felt that, whilst he might not be a very nice person, he is, for sure, an excellent character! I hope that you’ll stay with me as I unpack this statement.

My decade long dislike of Sasuke can, essentially, be boiled down to the fact that he has always acted as if he is better than everybody else around him. Smarter, stronger, from a more prestigious background… You get the gist. Whilst that may have been true in some instances, that’s still a pretty terrible way to act. Even if you’re smarter than your friends, you don’t ridicule them, calling them idiots, losers, or nuisances! And even if you’re stronger than your friends, you don’t physically abuse them!

Not only did these actions leave a bad taste in my mouth, they just made no sense to me. It must be terrible, to lose your entire family in such tragic circumstances. Something like that is far beyond my understanding. But try as I might to figure Sasuke out, I just couldn’t wrap my head around why he’d respond to this tragedy by physically and emotionally lashing out at and, ultimately, casting aside his friends. 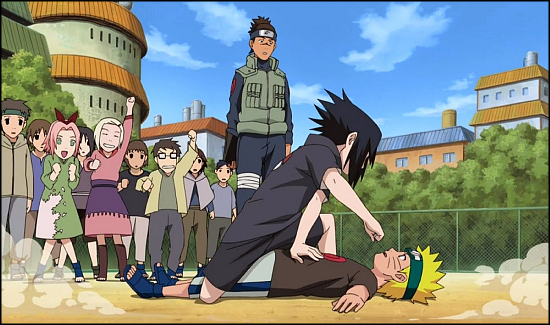 But then, all of a sudden, during that fight and its aftermath, it made sense to me. Sasuke would wield his superiority as a weapon all in order to hide his massive inferiority complex. He’d spent a large portion of his early years being compared to his older brother, Itachi, who was frequently called a child genius, and being underappreciated by his father, who’d measure his success based on the precedent set by his brother. And then, when Sasuke’s family were killed by Itachi, it suddenly became impossible for him to ever receive validation from his father. This meant that he sought it from other people, such as his teachers and fellow students. Sasuke might not have been as obvious as Naruto in his quest for validation, but the way in which he relished every opportunity to showcase his skills and make others seem weaker by comparison, speaks volumes.

When taking the above things into consideration, Sasuke’s abhorrent behaviour towards Naruto suddenly makes sense to me too. When people began to praise Naruto, another orphan who accentuated Sasuke’s strength and talent through his lack thereof, more than him, it reminded him of his inability to measure up to his brother. From that point on, Sasuke’s treatment of other people became more cruel and extreme. It reminds me of the Hedgehog’s Dilemma. We crave the love and approval of other people, but, at the same time, we’re afraid of being hurt and rejected by them. This can result in self-imposed isolation and withdrawal, which is exactly what happened with Sasuke.

Sasuke’s defection to Orochimaru wasn’t just about obtaining power, it was also about self-preservation. He sought to distance himself from other people before they could distance themselves from him and protect his fragile ego by proving that he was better than everybody who had made him feel weak, including Gaara, Itachi, the Sound Four, and even Naruto.

Sasuke’s somewhat baffling decision to work towards becoming Hokage also makes sense in light of his inferiority complex. At first I was confused as to why he’d want to become the leader of the village which, just an episode prior, he was hellbent on destroying. But what better way to get people to acknowledge you than by making them acknowledge you, through fear and the exertion of power?

So what about all of this makes Sasuke such a great character? Well, first of all, it demonstrates just what a complex, developed, and well thought out character he is. It also makes it very difficult not to empathise with him. Whilst I’m sure that most people haven’t had their family brutally slaughtered, who hasn’t felt bitter disappointment at the emotional unavailability of a loved one? Who hasn’t poured their all into a task only to feel devastated when they don’t measure up to a friend or a sibling? Who hasn’t felt the need to isolate themselves for fear of hurt or rejection? I, for one, can identify with all of these things! And that makes it insanely difficult for me to keep hating Sasuke!

Another reason why Sasuke is such a great character is that he proves that nobody, no matter how warped they become, is beyond redemption. Sasuke’s journey into darkness, as described above, lasted more than 600 episodes. But in just a few moments, during just one episode, in which he is able to peer into Itachi and Naruto’s memories and be reminded of the value of friends and allowing yourself to be loved by them, you can literally see more than a decade of hurt, resentment, and bitterness melt away. Where Sasuke once represented the profoundly damaging effect that other people can have on you, he now represents the healing and restorative power of unconditional love. And that’s a message that we can all get behind! 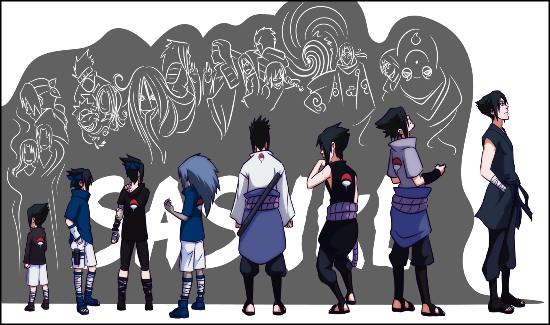 Whew, that turned into quite the essay! If you read the entirety of that, I commend you! Before you go, please leave a comment letting me know what you think about Sasuke. Has your opinion of him changed over the years? If so, how? I’m looking forward to hearing from you!