Posted by Ty-chama on September 18, 2018
Posted in: Anime Series, Character Spotlight, My Hero Academia. Tagged: Hero worship, Midoriya Is Moe, My Hero Academia is the saviour of the shounen genre, Top 30, Ty's Taste in Guys. 6 Comments

In celebration of yet another fantastic episode of My Hero Academia (MHA) this week, in which Bakugou and Midoriya were finally able to diffuse the tension between them through an epic clash of fists, I would like to dedicate September’s Character Spotlight to my favourite fledgling hero (as well as one of my all-time favourite anime characters), Izuku Midoriya. 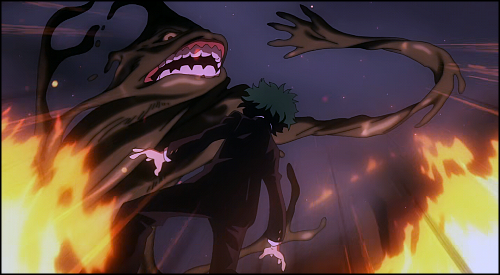 One of my favourite things about Midoriya is that he is by no means naturally gifted. In a world where 80% of people are born with incredible, superhuman powers (quirks), he was born quirkless. However, this didn’t stop Midoriya from putting himself in danger to rescue Bakugou from the Sludge Villain during episode one. This was actually the first thing to endear me to him (and to MHA). Even when the odds were stacked against him, he didn’t hesitate to risk life and limb to save somebody else (somebody who wasn’t even nice to him, but bullied him relentlessly), simply because it was in his nature to do so. In that sense Midoriya reminds me of another one of my favourite anime heroes, the laughably naff, Mumen Rider (One Punch Man). Like Mumen Rider, he is just a good, selfless person to his core.

Additionally, the great thing about characters who aren’t naturally gifted is that, unlike those who are inexplicably remarkable from the get-go, they represent a fantastic opportunity for growth. This is an opportunity that MHA doesn’t pass up, as Midoriya undergoes extensive mental and physical growth throughout its three series. 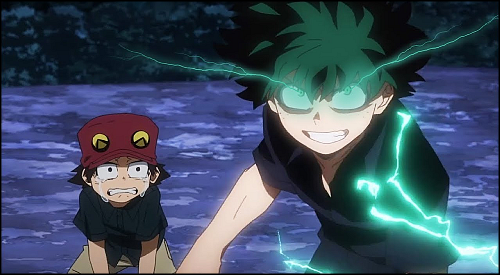 At the beginning of series one, while still quirkless, nobody thought that Midoriya was capable of becoming a hero, not even his own mum. It should come as no surprise then that he is unsure of himself, even after inheriting All Might’s immense strength. Nevertheless, as Midoriya learns to wield the power that he’s been given and is forced, by various events, including the villain invasion, the sports festival, and the training camp, to push the limits of his abilities, he slowly becomes more confident as he learns just what he is capable of. As a result, he soon comes to carry, not just the expectations of his peers, but those of All Might – to become the next symbol of peace. In these two ways Midoriya’s current self is in sharp contrast with his former self.

Yet, despite having come a long way and having achieved more than anybody could have thought possible, Midoriya is incredibly humble and down-to-earth. He doesn’t let the power that he’s been given go to his head or snap at every opportunity to show it off. Even during episode 21 it took quite some persuasion on Bakugou’s part, in the form of a barrage of verbal and physical attacks, to convince Midoriya to fight him.

Midoriya also proves that you don’t need a tragic backstory, complete with dead, murdered, or otherwise absent parents, to be an amazing main character. Whilst a tragic backstory can provide a character with an excellent (or, at the very least, plausible) motive to achieve ‘X’, it’s been done to death at this point. This means that the tortured, brooding main character is sort of cliché. Midoriya, on the other hand, has had a relatively normal upbringing and simply wants to become the greatest hero because he’s looked up to heroes all his life. In a superhero saturated world, this is something that many of us can relate to and get behind. In other words, Midoriya is also extremely relatable.

Adding to Midoriya’s relatability is the fact that he was raised in a single parent family, was bullied for being different throughout his childhood (and a good portion of his teen years), is rubbish with girls, and is a massive fanboy when it comes to heroes, even going so far as to keep detailed notes on various pros. Horikoshi-sensei definitely knew what he was doing when he created Midoriya, I mean, he represents a good chunk of his target audience! 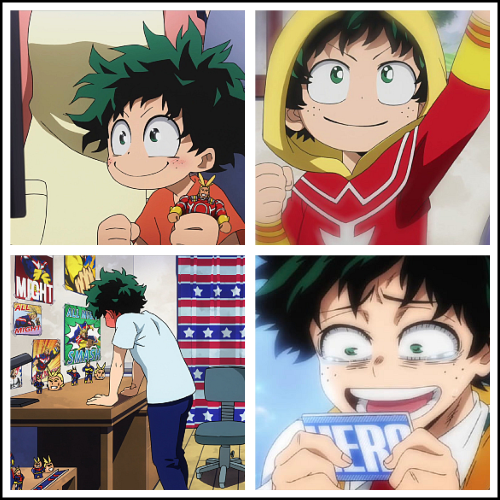 And, finally, Midoriya is just so adorable! Look at him! Look at his smoosh-able face! Uwu~ Everything about him, from his bond with his momma, to the way he gets easily flustered, to the way he gushes over superheroes, is so moe! Midoriya might be an excellent hero in his own right, but that doesn’t stop me from wanting to go all momma bear and protect him!

Thank-you for tuning in to Ty gushes some more over MHA! I know that my love for this amazing show is somewhat relentless and overwhelming (as evidenced by the frequency with which I write about it), but I’d argue that, in large part to its fantastic main character, Midoriya, that’s well deserved!