Posted by Ty-chama on October 23, 2018
Posted in: Anime Series, Character Spotlight, Haikyu!!. Tagged: Go Sports!, Shows That Are Just as Good as They Are Made out to Be, Ty's Favourite Characters. 4 Comments

Confession time: when I watch an anime that’s wildly popular there’s this part of me that wants to dislike it! This is so stupid, but I like to think of myself as a gourmand when it comes to anime, that my taste is far more refined and superior to everybody else’s and that popular shows are popular simply because the uncultured masses don’t know any better. Of course, this couldn’t be further from the truth! I’m no more cultured than anybody else just because I’ve seen Legend of the Galactic Heroes, and some anime are popular simply because they are great and are, therefore, deserving of their popularity. Haikyu!! is one such anime! It’s exciting to watch, has outstandingly high production values, and has a huge cast of engaging, lovable characters. Oikawa, one of these characters, is, in my opinion, the best of the bunch and is the subject of this month’s Character Spotlight! Minor spoilers for season 2 ahead.

What first drew me to Oikawa is the fact that, even though he is a player on a rival volleyball team, Aoba Jousai, and is, therefore, an adversary of Karasuno’s, every single character in Haikyu!! treats him with the utmost respect. His rivals have said of him that he brings out the best in his teammates and that he is the sole strong player on an otherwise weak team. Some even call Oikawa the “Great King”. That’s because he is a fantastic setter and a remarkable leader. Oikawa has a keen sense for his teammates’ strengths and weaknesses and is able to play to those. He also knows just what to say to encourage his teammates or to bring them out of a funk. I think that it’s extremely interesting for a rival character to possess so many positive qualities and to be so well-regarded by everybody else around them, despite the fact that they often crush their hopes of victory. 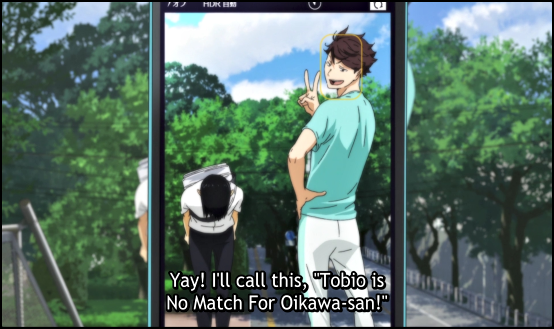 Saying that, Oikawa isn’t perfect. He is very competitive, which causes him to act extremely immature, at times. Oikawa is the master of trash-talk and knows just what to say to grind his opponents’ gears. This is probably a big turn-off for people more mature than I am, but I find this aspect of his personality to be quite endearing! Why? Because I’m just as competitive! I, too, get a kick out of winning at something (anything, really) and looking down upon my opponents in sheer glee from up on my winner’s podium. And I, too, revel in a perfectly timed put-down or smug glance while at the top of my game. I know that this makes me seem like a terrible person (and you’re free to speculate on that), but I feel such an affinity for characters like this! Not to mention, they’re hilarious!

I can’t crush on Oikawa, because he is 17 and 7 years my junior (the downside of being an aging anime fan), but this confidence, bordering on arrogance, makes him extremely appealing! It is little wonder that he is as much a hit with the ladies as he is with his male peers!

Finally, I honestly think that Oikawa is the best adversary that Karasuno is ever going to get. I just finished season 2 of Haikyu!! And I know that, going forwards, Karasuno will be facing off against Shiratorizawa and its star player, Ushiwaka. But I can’t help but think that, despite being the better, more skilled player, he’s just not as compelling a rival as Oikawa. We know next to nothing about him, like his playstyle, his background, or what his teammates are like, and what we’ve seen of his personality so far stinks. Whereas we spent two whole seasons getting to know Oikawa’s strengths, weaknesses, teammates, and personality (which is much more fun than Ushiwaka’s)! Haikyu!! also spent two whole seasons portraying Aoba Jousai as this formidable volleyball machine, so their battle against Karasuno during season 2’s finale was, naturally, emotionally-charged edge-of-seat viewing! I don’t see how the third and final season of Haikyu!! can possibly recreate that during Karasuno and Shiratorizawa’s match…

Whilst writing this blog post I realised that I’d made myself out to be quite terrible! But please do know that I try to rein in these innate tendencies of mine! I’m actually quite personable and very friendly! On that note, please leave me a comment telling me what you think about Oikawa. Or if there’s a character you prefer, I’d love to hear about them! I look forward to hearing from you!