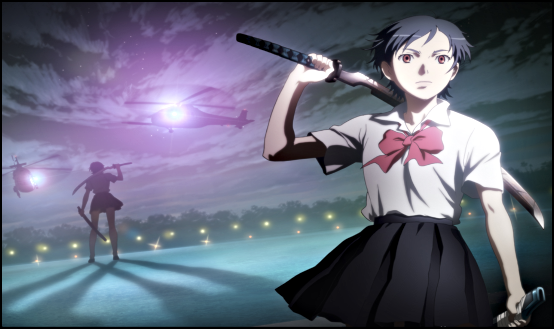 #22 What Is My Favourite Anime Weapon?

Today I will be, once again, cheating with this challenge (this has now become a kind of trend), as my actual favourite anime weapon is Attack on Titan’s maneuver gear. Alas, I already waxed lyrical over this amazing piece of weaponry during an earlier entry for this challenge, so, so as not to bore you guys to death, I thought that I’d discuss my second favourite weapon: Saya Otonashi’s katana (since I have not talked nearly enough about Blood+ for my liking)!

Disclaimer: I’m not somebody who gets all hot under the collar over weaponry. I’m about as anti-gun as they come (which sits about as well as you’d imagine with my peers here in the Deep South)! The only reason I can tell the difference between a Colt and a Remington is thanks to hours spent playing video games. I’m about as comfortable with knives, given that twice were people stabbed during drug deals gone wrong on the street that I lived on in the UK. Saying that, the katana’s sleek, slender, yet deadly curved blade and the skills required to properly wield it make it a pretty cool – dare I say it – even sexy weapon. Saya’s katana is no exception.

However, Saya’s katana is not your everyday, run-of-the-mill katana… It was designed specifically to kill chiropterans (the vampiric monsters rife in Blood+). The edge of the katana’s blade is curved in such a way so that, whilst gripping it, she may draw her own blood. This then coats the blade as it spreads throughout the grooves etched onto its surface. Given that Saya’s blood is toxic to her chiropteran enemies, this makes her katana all the more deadly. So her blade isn’t just beautiful, but unique.

Unlike most weaponry in anime, which often lacks any kind of subtlety (I often wonder if anime characters – men especially – are secretly trying to outdo each other with their massive, almost phallic, weaponry), Saya’s katana is loaded with symbolism. It inflicts damage, not just on her enemies, but herself, each time she uses it. These physical knicks and cuts mirror the injuries to Saya’s mind as she continues down a path forced upon her by other people. Without going into too much detail, because I wouldn’t want to spoil Blood+ for you, I would also argue that, in an anime where blood is so important (in terms of familial ties), it is no coincidence that Saya uses her blood to literally sever those ties to her blood kin. 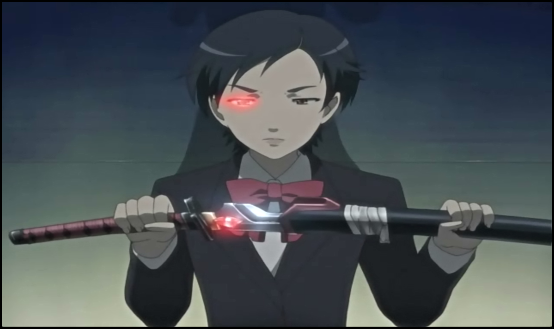 Saya’s weapons also carry sentimental value. Her first katana bridges the gap between her past, forgotten self and her present self, whereas her second, and my favourite, with its red crystal nestled at the base of its blade, represents the bonds that she’s formed with her adoptive family and the Red Shield organisation.

In short, Saya’s katana is beautiful, unique, and well-thought out. However, this isn’t Blood+’s only redeeming feature. Before you go I just wanted to sing this awesome show’s praises a bit more!

Blood+ is a 50 episode anime, however, it is well worth investing your time in! Because of its length, its characters (even many of its minor ones) are given plenty of time to grow and develop. By the show’s end I had fallen deeply in love with the entire cast – even the villains! Saya, the show’s heroine, is particularly lovable. Despite her horrific past, she possesses this immense capacity to love, which is incredibly endearing. It’s also super satisfying to watch a heroine who isn’t degraded or demeaned through cheap fanservice or whose sole redeeming feature isn’t how desirable she is to the men around her. In fact, Saya passes up the opportunity for romance numerous times throughout the show. Her most cherished bonds are the ones that she shares with her adoptive family.

Blood+’s length also meant that it was able to use multiple settings. Throughout the anime its characters travelled the world: from Japan, to Vietnam, from Vietnam, to Russia, from Russia, to England, and so on. This frequent change of scenery kept the show feeling fresh in spite of its lengthy runtime and is something that is rarely done in anime.

Another great thing about Blood+ is its willingness to kill off important characters. Nobody (men, women, and children included) was completely safe. This meant that I was always perched precariously close to the edge of my seat, hoping that my favourite characters would make it through each episode unscathed. This kind of tension is all but nonexistent in many shows, where heroes, donned in their impenetrable plot armour, laugh in the face of death on a regular basis!

These are just some of the reasons why I love Blood+. There are many, many more – which I’d be more than happy to discuss with you if you’re at all interested in being proselytised! This is probably my third favourite anime of all time, so if you’ve yet to see it, please, please, please give it a go!