Chihayafuru is an amazing anime with (soon-to-be) three two-cour-long seasons under its belt. It ought to come as no surprise, then, that it has a huge and varied cast of characters. You’ve got your three main characters, Chihaya, Taichi, and Arata, whose passion for karuta is nigh on contagious, their teammates, whose encouragement propels them forward at the most crucial of times, their friends in their respective karuta societies, their parents, some of whom are for, some of whom are against their dreams, and their many, many rivals, including the quirky queen, Shinobu, and the mysterious master, Suo. Why, then, have I decided to dedicate this month’s Character Spotlight to Haruka Inokuma, a relatively new character with only a few episodes of screentime under her belt? Well…

Before Shinobu took her place atop her lofty throne, Haruka was queen, a position she’d managed to hold for four years straight. Her sharp ears and game sense are practically unrivalled, and if not for her two maternity leaves she may have continued to maintain her position. But Haruka’s skill isn’t why I love her. The reason I love her is that there aren’t many characters like her in anime. Haruka’s 34, a wife, a mother… Characters like her are usually relegated to the sidelines, there to deliver the hero their meals or get brutally murdered for the sake of tragic backstory™. Yet here’s Haruka, not only kicking some serious butt (she might have lost to Chihaya, but she definitely gave her a run for her money), but getting just as much screentime, backstory, and development as the rest of the show’s heroes. I just love seeing different kinds of character represented in anime. Teenagers and young adults are, dare I say it, over-represented, so it’s nice to see an older character get some attention for a change!

As somebody in their mid-20s, it’s getting more and more difficult for me to relate to the problems that teenagers face, which is another reason I love Haruka. Her dilemma really resonates with me. Haruka’s a mum to two young boys, one of whom she’s still breastfeeding. As such, she must juggle her responsibilities as a mother and her passion for karuta (and often feels guilty whenever dedicating time towards the latter). While I’m not a mum myself, I do have a husband, a very needy cat, a full-time job, family and friends across the globe, and a social life here in the US – that is to say, a lot of different things pulling me in a lot of different directions! So I know what it’s like to feel guilty when spending time pursuing my passions. It’s like, am I a bad wife/friend/daughter for blogging or for watching anime when I could be doing X, Y, and Z? I know, on an intellectual level, that the answer is, of course, no, and that having hobbies makes me a better, more well-rounded (and sane!!!) person, but, like Haruka, I need to keep reminding myself of this, every so often. At any rate, it’s nice to see a character who wrestles with this same mundane (yet oft-overlooked by anime) problem! 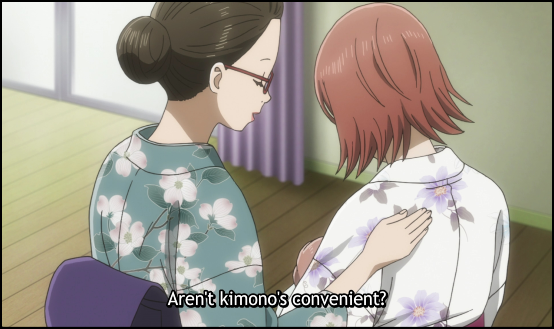 I also love that Chihayafuru isn’t portraying Haruka as a bad person or a bad mother for pursuing her passion. If that were the case, she’d be punished for even daring to step foot onto the mat, but, instead, she’s been given a supportive husband who does his best to look after the kids while she’s practising or participating in tournaments and a good friend who challenges and encourages her. And, during a recent episode, Ms. Oe taught her that the kimono was practically built with breastfeeding in mind. In other words, Haruka’s been given every resource she needs to once again excel in her spot. To this day, Japan, and anime, are considered a little behind the times in its treatment of women (especially mothers). And, while I’m not about to wade into that messy debate, I will say that Haruka and the way in which she’s portrayed still feels pretty darn progressive!

Finally, I just love a good underdog story! Haruka’s skilled, yes, but she’s been out of the game for quite some time now and is pretty rusty. And over the past four years, a lot of young talent has emerged, not least the current queen, Shinobu. But while the odds may be stacked against Haruka, I really want to see experience and perseverance topple youth and enthusiasm. I really want to see her wipe that gloating grin off of Shinobu’s face as she reclaims the title that was once hers. It won’t happen, but I still want to see it!