Astra Lost in Space’s premise is simple enough: set in the distant future where space travel is a normal, everyday occurrence, a group of high schoolers, while on their class trip, suddenly find themselves transported to the far reaches of uncharted space. There they find an abandoned spaceship and soon begin their perilous journey back home, touching down on each planet they pass in the hopes of scavenging resources. Surprisingly, deadly aliens aren’t the only threat our characters face. In fact, the real threat turns out to be much closer to home. Astra may seem like an odd choice for my hidden gems series. After all, it only finished airing last year and hasn’t yet had the time to fade into obscurity like my other choices. Nevertheless, I feel that Astra, with its less-than-stellar marketing, was oft-overlooked in favour of anime like Fire Force, Dr. Stone, and Demon Slayer. I’m hoping that this review will convince you to give the show a try if you, too, passed up on it last year.

END_OF_DOCUMENT_TOKEN_TO_BE_REPLACED 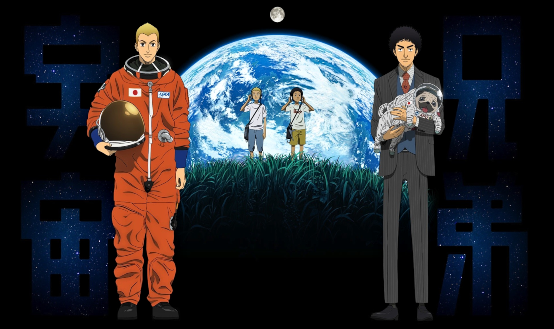 Late at night, while camping out in the hillsides of their hometown, brothers, Hibito and Mutta Nanba, spot what they think is a UFO whizzing its way to the moon. Awestruck, Hibito and Mutta vow to, one day, become astronauts and travel to the moon together themselves. Fast forward 20 years later and Hibito, the younger brother, is well on his way to achieving that dream. Mutta, meanwhile, is chronically unemployed. But could some meddling on the part of his parents, who send his resume to the Japanese Aerospace Exploration Agency (JAXA), be about to change all that? Space Brothers, which first aired in 2012, is a feel-good anime about two brothers supporting and encouraging each other to achieve their shared dream, overcoming the many obstacles that stand in their way. If my synopsis wasn’t enough to convince you to watch this hidden gem, I hope that my review (which you’ll find below) is!

END_OF_DOCUMENT_TOKEN_TO_BE_REPLACED

Tatami Galaxy is a strange story about a young, nameless college student in relentless pursuit of the “rose-coloured campus life”. This wish, to spend his college years luxuriating in a circle of his choosing, surrounded by a bevy of raven-haired maidens, is not easily fulfilled, however, as our protagonist repeatedly finds himself in all kinds of trouble and wishing that he could start over and do things differently. The show takes a strange turn when our protagonist does just that. But will a different set of choices lead to a different set of results? And will our protagonist finally be able to lead a worthwhile college life and make that all-important love connection? You’d have to watch the show to find out! In the meantime, please check out the following review!

END_OF_DOCUMENT_TOKEN_TO_BE_REPLACED

Posted by Ty-chama on November 6, 2018
Posted in: Anime Series, Gankutsuou, Review. Tagged: A Villain You Love to Hate, As Good as It Looks, Hidden Gems, Top 30. 9 Comments

Gankutsuou, or The Count of Monte Cristo, is the 14-year-old (I’m striking while the iron is red-hot here, people!) anime adaptation of Alexandre Dumas’ novel of the same name. It follows the titular Count as he exacts his revenge on the trio of men, all of whom belong to the upper class society of Paris, responsible for framing him for a crime he didn’t commit and young Albert, the naive son of one of these men, as he tries to unravel the mystery behind the bizarre goings-on that begin to take place shortly after their chance(?) encounter. Gankutsuou is a beautiful blend of timeless themes, including revenge and man’s capacity for evil, a futuristic setting, and supernatural elements that, instead of contrasting with each other, as you might expect, compliment one another and distinguish it from Dumas’ classic novel. Nevertheless, it is both criminally underrated and rarely discussed, so it is my aim, in reviewing it, to inspire those of you who have yet to see it to give it a go! Enjoy!

END_OF_DOCUMENT_TOKEN_TO_BE_REPLACED

Princess Jellyfish is about a young woman called Tsukimi. Tsukimi, who has been obsessed with jellyfish since her youth, lives a peaceful, man-free existence with a group of similarly strange women, the Amars, until, one night, during a campaign to rescue an endangered jellyfish, she meets Kuranosuke. It isn’t long before Tsukimi discovers, much to her surprise, given his impressive drag act, that Kuranosuke is actually a prince, not a princess! Thus begins an unlikely friendship between the two characters. Over time Kuranosuke helps Tsukimi to grow in confidence, Tsukimi helps Kuranosuke to open up to other people, and the pair combine their love of fashion and of jellyfish to help save the Amars’ home from a group of predatory landsharks. See MAL for more info.