This one’s a toughie because there isn’t really an anime I wish never ended. This applies to even my favourite shows, like Blood+, Naruto, and Fullmetal Alchemist: Brotherhood. I love these shows to the moon and back, but I’m still glad that they ended (eventually). Why? Well…

END_OF_DOCUMENT_TOKEN_TO_BE_REPLACED

The anime that I wish was real, or the fictional world that I would most like to step inside of and immerse myself in, would have to be Mushishi. Mushishi is a lesser-known masterpiece that first aired during 2005. The show is about a man named Ginko who travels the world studying these strange creatures known as mushi. Mushi are, ordinarily, invisible to the eye, but are, nevertheless, responsible for various phenomena, some natural, like rainbows, others, supernatural, like immortality, the ability to sense impending disaster, and the ability to communicate with animals.

END_OF_DOCUMENT_TOKEN_TO_BE_REPLACED 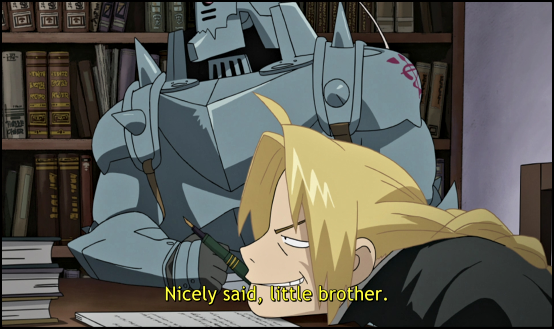 #28 What Is My Favourite Quote?

Alphonse Elric: “You’re not a good-for-nothing person. I think that being able to try your hardest at something is a talent all by itself. […] I think you should have more faith in yourself.” – Fullmetal Alchemist Brotherhood

I had no problem choosing a quote for this challenge item. Despite it being nearly 10 years since I first saw Fullmetal Alchemist Brotherhood and despite the fact that the scene in which it’s spoken is fairly inconsequential to the anime as a whole, I’ve carried this quote with me through the years like a protective talisman.

END_OF_DOCUMENT_TOKEN_TO_BE_REPLACED 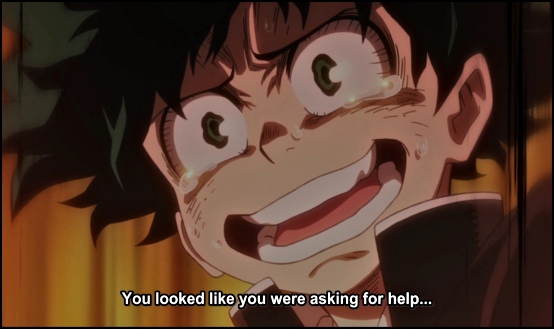 #27 What Is My Favourite Scene in Which a Character Acts like a Complete and Utter Badass?

This may seem like a bizarre choice for my favourite scene in which a character acts like a complete and utter badass. Deku’s probably not the first character who comes to mind when considering all-out badassery. Maybe you think of a character like Guts, capable of taking on armies of one hundred or more soldiers single-handedly, one of JoJo’s many meatheads, or somebody like Sasuke, who’s as cool as a cucumber and always has a snappy clapback tucked away in his long, billowing sleeves. But I’d like to argue that Deku is just as badass (if not even more so) than these characters. And nothing exemplifies that better than the scene when, during My Hero Academia’s first episode, he rescued Kacchan from the Slime Villain. This was the scene that first won me over to the franchise and catapulted Deku straight into my Top 10 Favourite Characters, so it holds a special place in my heart!

END_OF_DOCUMENT_TOKEN_TO_BE_REPLACED

Posted by Ty-chama on January 25, 2019
Posted in: Anime Series, Naruto, Projects. Tagged: 30 Days of Anime Challenge, Brutal Battles and Fantastic Fights, I'm Not Ashamed of My Love of Naruto. 6 Comments 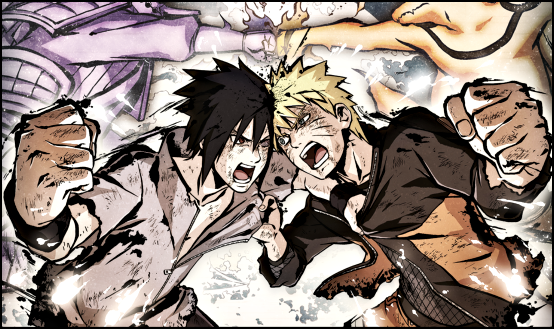 #26 What Is My Favourite Fight?

You’d think, given the amount of fantastic fights in anime, picking just one, my favourite one, to write about would be quite the challenge. However, when considering the topic, only one floors all other contenders: Naruto vs. Sasuke, the final fight.